The TRUE Secret To The Digital Pregnancy Tests...and many others

Most people find their way here after cracking open a Clearblue Digital Pregnancy test that said "not pregnant", yet the inner strip has two lines. If that's you, welcome to this site. I hope you find the information here helpful. If you are just looking for pics they are at the bottom of the page.

There isn't one simple answer here; you could be pregnant, and you may have tested too early. However, (and don't let this get your hopes down) the CB digital will almost always have a second faint line.

First, let me say that Clearblue Digital Pregnancy tests do not pick up Lh. I see this referenced everywhere in forums, and it drives me crazy. I believe this started from a website owner incorrectly interpreting a patent that Clearblue owns which referenced all of their digital testing products, which is what a patent does. Obviously, that list included their digital ovulation kits which do pick up Lh; their pregnancy tests don't. So, on to why you might have 2 or 3 lines on your digital pregnancy test strips...

Why are there two or three lines on a digital even when you aren't pregnant?

The digital pregnancy test captures more than one type of hCG. Why? Because there are many types of hCG made by our bodies, intact hCG, free subunits and degraded forms, and the test doesn't have to differentiate between them since it's not being examined by the human eye. Technically, we aren't supposed to see the test strip, it's meant for a mini computer to analyze. Therefore, during manufacturing the same strict controls don't need to be followed like they would for a pregnancy test that women would be reading manually.

Now, about that hCG. As I mentioned, there are many types of hCG made by our bodies, some of theses are intact hCG, free subunits and degraded forms. Not all of these forms of hCG are used to detect early pregnancy. In the scientific field you'll see them as BhCG, hCGbf, HhCG and nicked hCG. The hCGbf or hCG beta core fragment is something that is "free" in your system at all times in very small amounts, until later in a pregnancy when it is produced by the placenta, and it becomes the primary form of hCG circulating. This form is also one of the first hormones to become slightly elevated in a successful conception cycle, as early as the day after ovulation, actually. It's believed it's released by blastocyst shortly after conception. However, it becomes elevated by only a small amount, just enough to send the needed signals to the vital parts necessary to sustain the expected implantation of a viable embryo, and the Corpus Luteum among other important processes needed in very early pregnancy.

The main form of hCG found in the urine during very early weeks of pregnancy is Hyperglycosylated hCG, which is a degradation product of hCG that is commonly referred to as "nicked hCG" in the scientific field. This Hyperglycosylated hCG becomes elevated a mere 3 days after conception. If you'd like to know more juicy info about this hCG you can visit this post How sensitive are "early" pregnancy tests?.

With that being said, if you are obsessed like me and test daily the important thing to look for is the increasing intensity of these faint second lines over a matter of days. If you are indeed pregnant that faint line will increase in intensity very quickly.

What about if you've had a positive results with a digital pregnancy test, but tested again later and got not pregnant, are you actually pregnant? It's very likely you are in fact pregnant. A mistake people make with the digital HPTs (Home Pregnancy Tests) is testing more than once in a day, or testing in the evening the day before, then using first morning urine (FMU) the next day. It's best to only test once a day with a digital test because of their unstable detection limits (see below for why). It's also best to pick a time of day and stick with it, meaning if you tested in the evening today, test in the evening tomorrow.

Contrary to belief FMU doesn't always contain the most hCG; studies have shown that in very early pregnancy the amount of hCG in a pregnant woman's urine fluctuates dramatically with no direct correlation to the specific gravity of the urine. Specific gravity means the concentration of the urine, so FMU may not always be the best urine to use. I've tested multiple times a day to show progression early on, and there has been a strong contrast between FMU and evening urine - evening urine always giving darker results.
For example here are my Pregmate test strips for "9DPO" (but turned out to actually be 8DPO!) as you can see the verrrrry faint line progressed throughout the day:

These test are awesome btw. I highly recommend them. They are much wider than typical cheapie strips, and one of the most sensitive tests I've ever come across. I always buy mine on Amazon, they are very cheap. Seriously though, for less than you'd pay for a 2 pack of First Response tests you can get 100 Pregmate pregnancy tests. They work better than First Response, and are more sensitive. These are the package I purchase, and the ones shown in my pictures above PREGMATE 20 Pregnancy HCG Test Strips

How the test works:

If hCG is present in the urine it will bind to anti-αhCG antibodies attached to blue dye in the pad. As the hCG and anti-αhCG antibodies pass through the result line zone, they bind to anti-βhCG antibodies to form blue result lines. Both strips contain a ‘result’ line; the low sensitivity strip also contains a ‘control’ line. At low concentrations, hCG binds on the high sensitivity strip. At higher concentrations, hCG will alsobind to the low sensitivity strip. The concentration of hCG detected in the results lines of the two strips determines the result of the Conception Indicator: 1-2 weeks since conception; 2-3 weeks since conception; 3+ weeks since conception. If no hCG is present, the anti-αhCG antibodies attached to blue dye flow past the result zones on both strips, and no lines will be formed giving a ‘Not Pregnant’ result. If insufficient hCG is present, result lines may form but will be below the lowest thresholds set, and a ‘Not Pregnant’ result will be displayed.The lines produced on the strips cannot be read by eye. Instead, an optical system is used to measure the density of the lines. A red light shines onto these specific areas, and the light reflected is converted into an electrical signal."

Broken down into plain english:


This important part here: "The Test Monitors the control line on the low sensitivity strip and only when a valid control line has been detected will the result lines on both the strips be determined." I believe this is where the discrepancy falls with CB digi tests. I believe that once the control line reaches a certain depth of color the optical light is triggered. Meaning that it's possible that the "result" lines may not have had enough time to darken to signal a "pregnant" when indeed the outcome was positive. This is represented by all the digital tests that are taken and "not pregnant" then put beside First Response when a clear pink test line is visible. Later on, the clearblue digital registers pregnant. This is exactly what I was referring to when I said "the unstable detection limits of digital pregnancy tests".


Last but not least pictures of "not pregnant" and "pregnant" results. There are pics showing very clearly showing 2 (or 3 in this case) lines when a no pregnant result was given. In some cases these people were pregnant, each pic will be marked with the outcome if possible. Some will be consecutive pics, some will be alone, some are for the digital and some are for the digital with conception indicator. 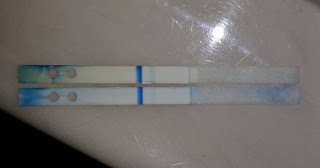 Both low sensitivity strips from the Conception indicator "not pregnant" (above) 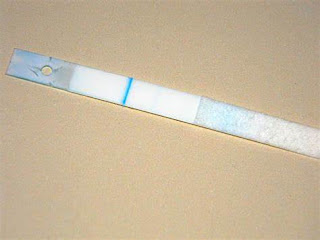 Not Pregnant digital test strip (above) 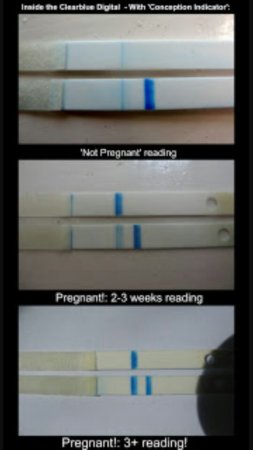 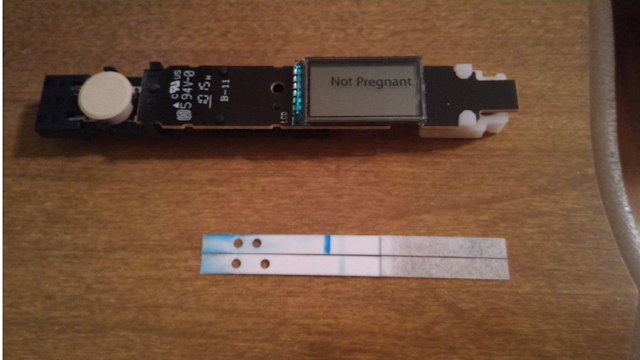 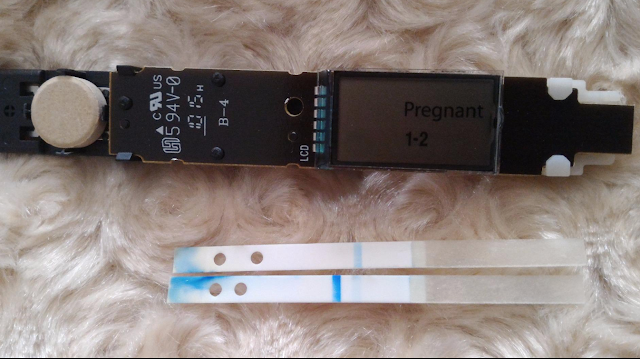 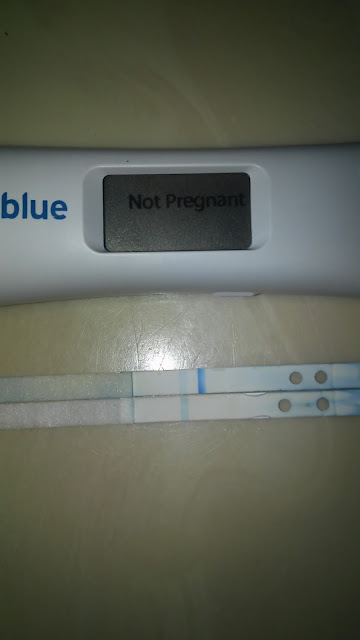 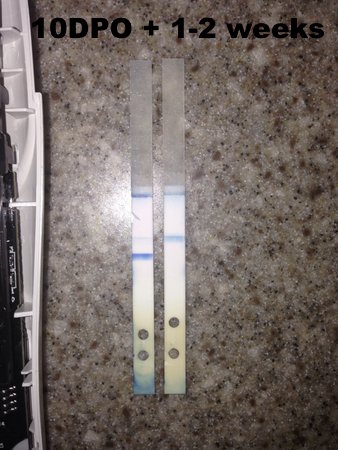 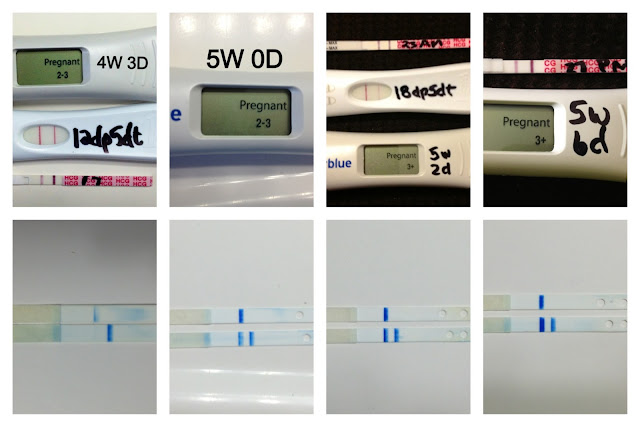 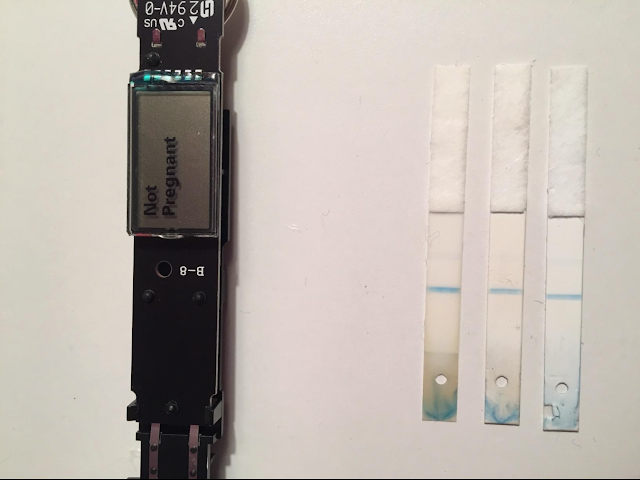 Regular CB digital - All "not pregnant" 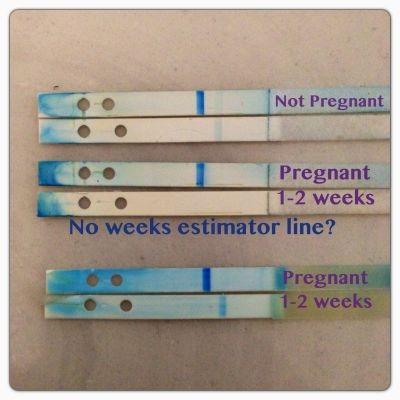 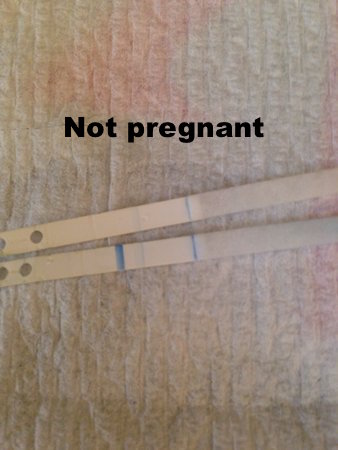 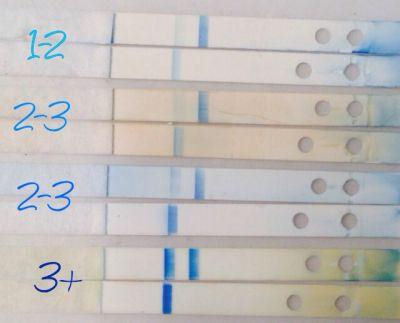 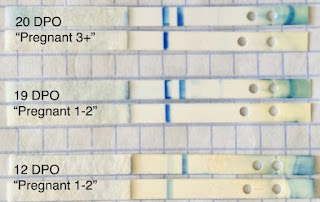 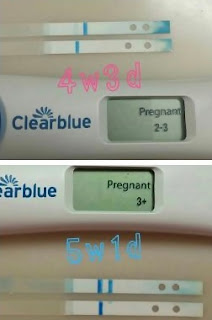 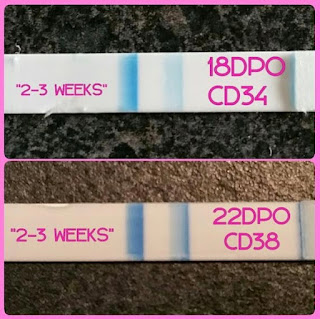 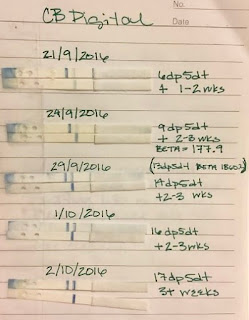 This is why two or three lines does not always mean you are pregnant. It's best to let the digital reader do the line analysis work.

Short summary: If you decide to open a digital pregnancy test and there is a faint second line, it's normal. There's usually always two lines, or three with the Clearblue Conception Indicator test. It does not necessarily mean you are pregnant, nor does it mean you aren't. The test area has just picked up the trace amounts of hCG that we all have in our systems all the time as explained in detail above. If you're testing early it's best to wait a day and test again.


I hope this info was helpful. If you have pictures to share of of your digital pregnancy tests please send them to me, and I'll do my best to post them here. Thank you!
Labels: The TRUE Secret To The Digital Pregnancy Tests...and many others

If you are stopping by and finding this blog helpful in anyway please either follow or leave a comment. Tell someone else about it! I'm super busy so please let me know it's helpful so I can devote more time to it :) Thank you!